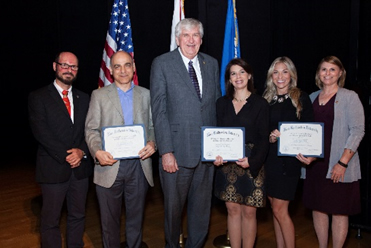 Autism is a neurodevelopmental disorder whose prevalence is now increasing at an alarming rate. There are believed to be a combination of factors that cause autism; oxidative stress is one factor that plays a role in this disorder. It is known that children with autism have ~35% lower levels of the key antioxidant glutathione and their altered redox statuses make them more susceptible to oxidative damage. Chronic oxidative stress can lead to damage of proteins, lipids, DNA and even cell death. In preliminary studies using lymphoblastoid cell lines (LCLs) from children with autism versus those from neurotypical controls, the autism group showed a significant increase in the percentage of cells undergoing cell death. The autism LCL group also had lower levels of apoptosis therefore suggesting the role of other cell death pathways. The primary goal of this study is to determine if death pathways caused by oxidative stress such as necroptosis and ferroptosis play a role in the pathophysiology of autism disorder.

These are both newly discovered programmed cell death pathways, which stem from high levels of oxidative stress, and have never been researched in autism. We hypothesize that the LCLs from children with autism will show higher levels of lipid peroxides, less cysteine uptake and less glutathione content than from controls. Finally, we believe this would create the perfect oxidative stress conditions for cell death to occur. Overall, any research on this topic would be beneficial to further understand molecular mechanisms in autism that could potentially be utilized for later interventions.