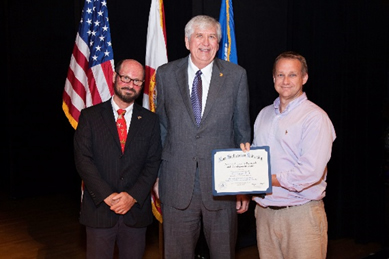 The primary objective of this project is to supplement a planned study that characterizes previously known and newly identified large and dense patches of threatened staghorn coral, Acropora cervicornis, in SE FL. Dense patches of A. cervicornis have been known to exist along the Florida coast for over 15 years; however, their sizes, distributions, and persistence have not been sufficiently elucidated. These are the largest dense patches in the continental United States and as such offer a unique opportunity to evaluate population demographic structure and condition in a growth form (dense patches) which was once dominant but now rare. Recently, 28 undocumented dense patches of A. cervicornis were identified in aerial photography exceeding over 110,000 m². The identification of these new, large dense patches highlights a critical data gap in our knowledge of A. cervicornis distributions and population distribution, demographics, and status. No other location along the Florida Reef Tract has these dense patches, and therefore, detailed patch mapping, characterization, and long-term monitoring addresses the very significant gap in knowledge on how this species survives and grows. Two of these dense patches have been mapped and monitored for the last four years providing a time series progression of patch movement and expansion. These data have provided insights into the temporal dynamic nature of dense patches, and the proposed addition of new patches will facilitate a full, regional scale approach to the demographic sampling regime.

The Florida Department of Environmental Protection agency is planning to fund NSU for a study that will acquire population and condition data of all dense patches identified in the southeast Florida nearshore benthic habitat mapping study (totaling 35). A one-time survey will be completed to characterize each patch to evaluate patch condition and density. These characterizations will include an assessment of four non-overlapping 30-m transects to estimate cover of live tissue and standing dead A. cervicornis as well as other benthic functional groups (other stony coral species, octocorals, sponges etc.) and substrate types (pavement and rubble). Within 1 m, colony abundance, size, prevalence and identification of disease, and predation will be recorded as well. The expected FDEP funding does not include quantifying the perimeters of each patch. The initial areas were defined in the aerial photography by tracing around each dense patch. This is a general estimate of size because oftentimes the patches have diffuse boundaries. We have developed a methodology to quantify the dense patch boundaries that can produce more consistent results using snorkelers, but this requires additional boat days and field efforts. Since several of these patches have demonstrated significant changes in both coral condition and patch perimeter, it is essential that this information is collected in the planned 2016 assessments. Here we are proposing to enhance the planned funded efforts by including perimeter mapping for the dense patches. Together these data provide a complete baseline of the 35 staghorn coral dense patches. These data will then be leveraged in the future to secure funding for additional assessments to identify temporal change in both patch condition and movement.