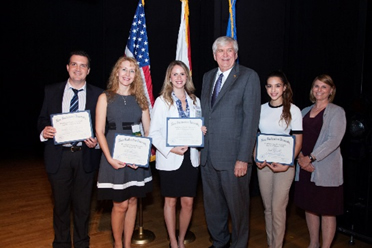 Heart failure (HF) represents one of the most significant health problems worldwide and new and innovative treatments are urgently needed. Aldosterone is one of a number of hormones with detrimental effects on the myocardium, whose circulating levels are elevated in chronic HF. Aldosterone can contribute significantly to HF progression after myocardial infarction (MI) and to the morbidity and mortality of the disease. Aldosterone is a mineralocorticoid produced and secreted by the cells of the zona glomerulosa of the adrenal cortex in response to either elevated serum potassium levels or to angiotensin II (AngII) acting through its type 1 receptors (AT1Rs). AT1Rs belong to the superfamily of G protein-coupled receptors (GPCRs). Upon agonist activation, they couple to either G proteins or the βarrestins (βarrestin-1 and -2, βarr1 and -2), which initially desensitize (terminate) G protein signaling from the receptor and, subsequently, mediate their own, G protein-independent, signal transduction.

We have found in the past that the AT1R induces aldosterone production from the adrenal cortex through βarr1. Additionally, we have tested the currently available in clinical practice AT1R antagonist drugs (angiotensin receptor blockers, ARBs, or sartans) at their ability to block activation of ßarr1 by the AT1R in the adrenal cortex, thereby preventing aldosterone synthesis and secretion and ameliorating HF. Unfortunately, none of them was found particularly effective at suppressing ßarr1-dependent aldosterone production. Therefore, based on our structure-activity relationship data from these drugs, we designed our own novel ARB molecule, which should theoretically be very effective at suppressing adrenal ßarr1-dependent aldosterone production. In the present proposal, we will study the biochemical and biophysical properties of this compound in vitro in adrenocortical zona glomerulosa (H295R) cells in culture in an effort to validate it as an efficacious inhibitor of ßarr1-dependent aldosterone production. If confirmed as such, then this molecule will make an excellent candidate for further development as a novel, very effective drug for heart failure, hypertension, and other cardiovascular diseases affected by elevated aldosterone levels.