How Vulnerable are Coral Islands to Rising Sea Level? 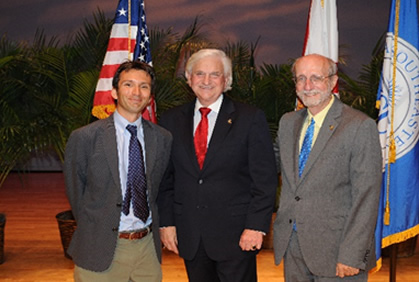 Coastlines are dynamic environments and their morphology is influenced by a host of environmental controls, including sea-level rise, on time-scales of minutes to millennia. Not least because of our desire to live by the sea, the dynamics and drivers of coastal change have been intensively studied. Coral islands are low and flat with maximum elevations typically in the range of only a few meters. Being only slightly above sea level carries several implications. First, the islands are vulnerable to extreme events such as catastrophic storms as well as global environmental change; sea-level rise in particular. Second, atoll islands have small land area and few natural resources. Supplies of freshwater maybe limited, for example, and groundwater is often brackish. Besides the damage inflicted by sea-level rise itself, coastal erosion, surface flooding, and saltwater intrusion into soil and groundwater all conspire to threaten the habitability of atoll islands globally.

This project has been made possible by the discovery of a set of vintage aerial photographs acquired by the US Navy over the coral islands of the Chagos, central Indian Ocean. These photographs have been donated to NSU by Prof. Charles Sheppard, a collaborator on this project. The archive aerial images will be paired with recently acquired ultra-high resolution satellite images, also in-hand, in order to quantify the coastal shift of a series of atoll islands in the last fifty years.

Being uninhabited, Chagos represents a unique natural laboratory where the impact of sea-level rise on island morphology can be examined without the compounding effects of human construction. The results from this study will offer insight into the natural ability of atoll islands to persist in the face of rising sea level, a question of scientific interest, but also most pertinent to the millions of people who live on low-lying tropical islands.