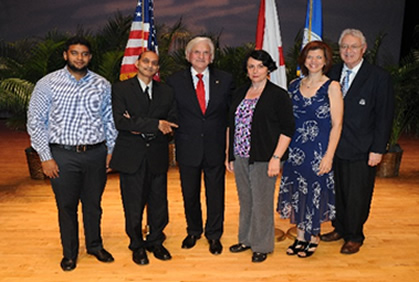 According to the National Cancer Institute (NCI) and American Cancer Society (ACS), in USA during the year 2014 about 1.7 million people were diagnosed with cancer and among them about a half million patients died, of that ~52% were male. Cancer therapy is challenging due to multiple reasons and unwanted side effects.  Therefore, more strategies are needed. Metabolically cancer cells are very different compared to normal cells. For example cancer cells live and thrive anaerobically (hypoxic) even when there is plenty of oxygen around. Therefore, understanding cancer cell metabolism is extremely significant to come up with drug targets that are better than the existing cancer drugs. We have demonstrated that cancer cell in culture when deprived of key amino acid methionine, undergoes nutrient deprivation induced cell aggregation or cell death. The severity of cancer cell aggregation or death varies between ovarian, prostate and kidney cell lines. This sets a strong basis for our current proposal to further understand the amino acid metabolism of prostate cancer cells.  Methionine is the first amino acid that is incorporated into proteins during synthesis. The activated form s-adenosylmethionine (SAM) is required for histone, mRNA and DNA methylation/modification. Thus, the fundamental process of DNA and chromatin modeling/remodeling that is quite unique between normal and cancer cells is dependent on methionine/SAM.

Here we hypothesize that upon transduction of cancer cells with methionine degrading enzyme (methionine gamma lyase 2-aminobutyrate deaminase, MGLD) gene localized into the nucleus using adenovirus vector with cancer cell restricted expression system, it will have severe effects on the overall gene expression, resulting in cell survival/cell death. Our approach of MGLD gene therapy to dwindle methionine nutrient pool is quite unique, novel and we hope our understanding of methylation metabolism will eventually lead to better and specific drug target and dietary strategies for cancers.