Join the Institute for Neuro-Immune Medicine as we host, Unrest, the Sundance award-winning documentary about ME/CFS, the most common disease you've never seen​. Jennifer Brea is about to marry the love of her life when she’s struck down by a fever that leaves her bedridden. When doctors tell her “it’s all in her head,” she turns her camera on herself and her community as she looks for answers and fights for a cure.

Are you a medical provider, researcher or government official? 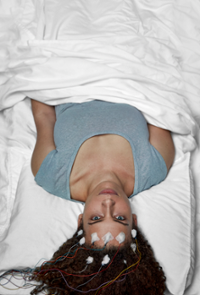 Twenty-eight year-old Jennifer Brea is working on her PhD at Harvard and months away from marrying the love of her life when she gets a mysterious fever that leaves her bedridden and looking for answers. Disbelieved by doctors yet determined to live, she turns her camera on herself and discovers a hidden world of millions confined to their homes and bedrooms by ME, commonly known as chronic fatigue syndrome.

At its core, Unrest is a love story. Together, Jen and her new husband, Omar, must find a way to build a life and fight for a cure. Their struggle to forge their relationship while dealing with her mysterious illness is at once heartbreaking, inspiring and funny.