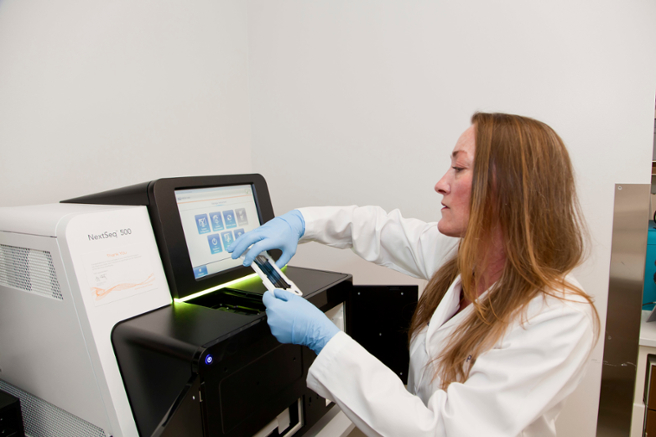 NSU is enthusiastically committed to and invested in international research, collaboration, and scholarship. NSU welcomes international students and scholars from around the world as an essential part of the NSU academic community. While NSU does not condone threats to academic freedom or discrimination against any person based on ethnicity or national origin, we must address the risks foreign involvement poses to U.S. University research. Recently, foreign influence has become a growing concern for the federal government. As evidenced by recent headlines, individual and institutional failures to disclose foreign research relationships may jeopardize eligibility for future funding and can result in federal investigations and criminal charges.
The US Government has expressed serious concerns regarding inappropriate influence by foreign entities over federally funded research in an attempt to compromise US national security.  Several federal funding agencies have issued new requirements and guidance, federal law enforcement agencies have increased prosecutorial activity, and Congress has signed new legislation and sought information on how the academic research community is responding to this evolving issue.
Federal funding agencies are particularly concerned about a failure to disclose foreign financial support on grant applications, failure to disclose foreign conflicts of commitment or interest, and the improper sharing of confidential materials (e.g. those available through peer review).  It is critical for all members of the NSU campus community to be transparent, particularly with respect to any affiliations with foreign entities. Your disclosure is required by University policy and procedures and for the University to be in compliance with federal guidelines. Only through disclosure can the University advise, assist, and protect you and the integrity of your scholarly activities.

The Office of Science and Technology Policy (OSTP) provides some examples of behaviors that can increase risk and harm the research enterprise. 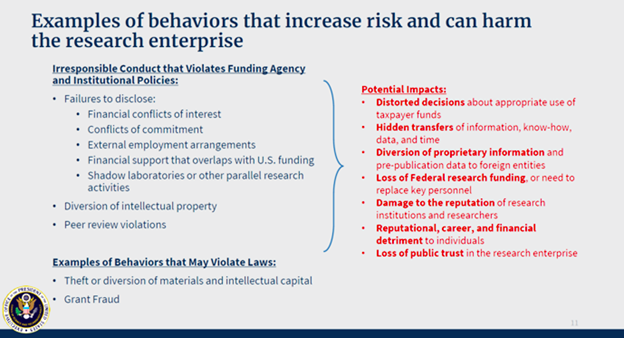 Guidance for the NSU Research Community

Nova Southeastern University and all other US educational institutions must comply with federal reporting and disclosure requirements. Below you will find general guidance regarding the types of relationships and activities that NSU researchers are expected to disclose, as part of existing university and federal funding requirements. Please note that each Federal sponsor has their own specific guidance, much of which is currently being revised.

Other Support & Current and Pending Support

NSU researchers should ensure they disclose all applicable “Other Support” as required by federal sponsors.  “Other Support” may include financial resources, domestic or foreign, available in direct support of a researcher’s research endeavors. Such support should be disclosed on an “Other Support” or “Current & Pending” form.

To help ensure full transparency and disclosure of foreign and domestic research activities, federal agencies have recently revised, or are revising, their guidance and/or requirements for disclosing sources of research support via Other Support or Current & Pending Support.  The Office of Sponsored Programs has a created a website to provide general guidance to NSU investigators for completing Other Support, as well as information on specific federal requirements, which vary slightly across different agencies. It is ultimately the responsibility of the individual researcher to ensure that the report of Other Support (Current & Pending Support) is complete and accurate to the best of their knowledge.

Investigators and other key personnel are also required to disclose on their Biographical Sketch any academic professional, or institutional appointments, whether or not remuneration is received, whether the appointment is with a foreign or domestic organization, and whether the appointment is full-time, part-time or voluntary.  Sponsor and program requirements can vary, so it is important for each individual to review and follow the specific instructions of the funding agency, as published in their agency policies and or funding application instructions.  If you have questions regarding these requirements, please reach out to the Office of Sponsored Requirements.

Foreign components of federally funded research must be disclosed on proposals, progress reports, and final technical reports. NIH defines a Foreign Component as

the performance of any significant scientific element or segment of a project outside of the United States, either by the recipient or by a researcher employed by a foreign organization, whether or not grant funds are expended. Activities that would meet this definition include, but are not limited to, (1) the involvement of human subjects or animals, (2) extensive foreign travel by recipient project staff for the purpose of data collection, surveying, sampling, and similar activities, or (3) any activity of the recipient that may have an impact on U.S. foreign policy through involvement in the affairs or environment of a foreign country.

Other sponsors have similar requirements to disclose foreign components.

There are multiple ways in which foreign components can be disclosed, e.g.,

Principal Investigators (PIs) should review all pending proposals and active awards to ensure that all foreign components have been disclosed.

The U.S. Office of Science and Technology Policy's National Security Presidential Memorandum 33 (NSPM-33), defines a foreign/international talent recruitment program (FGTRP) as an effort organized, managed, or funded by a foreign government, or a foreign government instrumentality or entity, to recruit science and technology professionals or students (regardless of citizenship, national origin, or full-/part-time status).

FGTRPs raise U.S. sponsor concerns when they appear to operate with the intent of acquiring proprietary technology or software, unpublished data and methods, or other intellectual assets to further the military and/or economic goals of a foreign government through actions including, but not limited to:

Compensation may include cash, research funding provided directly to the individual and not through NSU, access to research facilities or other in-kind support, honorific titles, career advancement opportunities, promised future compensation, or other types of remuneration/consideration.

NSU researchers are advised that participation in an FGTRP must be disclosed to the university and to federal sponsors in Biosketches and Current & Pending/Other Support. Failure to disclose participation in an FGTRP has resulted in legal action by the U.S. government against researchers who are engaged in federally-sponsored research.  When an investigator submits a proposal at NSU, they are required to certify they have properly disclosed their participation in a foreign talent program as part of the internal proposal approval process (see nova.edu/osp/resources/pre-award.html).

It is important to note that the recent passage of CHIPS and Science Act of 2022 on August 9, 2022, will require federal research agencies to publish policy guidelines within the next 180 days that shall:

(2) as part of the requirements under section 223 of the William (Mac) Thornberry NDAA of Fiscal Year 2021 (10 U.S.C. 6605; Public Law 116– 283), require covered individuals to disclose if such individuals are a party to a foreign talent recruitment program contract, agreement, or other arrangement;

(3) prohibit research and development awards from being made for any proposal in which a covered  individual is participating in a malign foreign talent recruitment program; and

Contact Katherine Rose at krose@nova.edu  if you need assistance determining whether an activity or relationship may be considered a foreign government talent recruitment program.

Certain financial interests in a foreign entity, including governments and universities, must be disclosed to NSU in accordance with applicable federal, state, and NSU requirements.

In accordance with Federal regulations, NSU has a responsibility to manage, reduce, or eliminate any actual or potential conflicts of interest that may be present in a Study Team. OSP Policy #16, Financial Conflicts of Interest in Sponsored Programs , is intended to meet the federal requirements governing disclosure, management and reporting of financial conflicts of interest (FCOI's).

Conflict of Commitment Disclosures
In addition to the financial interest disclosures mentioned above, the  NSU Conflict of Interest/Conflict of Commitment - Declaration & Disclosure Policy has additional disclosure requirements for outside professional activities, including conflict of commitment disclosure.  A conflict of commitment occurs when the time or effort that an employee devotes to external activities/relationships has the possibility (either in actuality or in appearance) of interfering with the employee’s fulfillment of assigned university responsibilities, or when an employee makes unauthorized use of university resources in the course of an external activity.

It is possible that you may need to list these activities within sponsored research proposals or progress reports before they are disclosed to the university. A few common examples of outside activities include: consulting, teaching courses at outside organizations, other organizational affiliations outside of NSU, or entrepreneurial ventures related to your area of research.
Export Control

Export control regulations are federal laws that restrict the export of specific items, information, and software for reasons related to U.S. national security, economic and foreign policy goals. NSU is committed to complying with all U.S. export control laws in both research and non-research activities.

Export controls usually arise for one or more of the following reasons:

The federal government has shared concerns about improperly safeguarding certain types of privileged information. Through the peer review process, faculty may have access to confidential information or Intellectual Property in grant applications. NIH peer review policies strictly prohibit sharing an application with anyone who has not been officially designated as a reviewer.

University faculty and staff routinely host international colleagues for short-term visits to campus. In rare cases, visiting scholars may be pressured by their home countries to inappropriately access information or research facilities and equipment.

If you are asked to facilitate the visit of a foreign delegation or asked to sign a Memorandum of Understanding with a foreign institution, please contact the Office of International Students and Scholars (OISS).  OISS  administers NSU’s Exchange Visitor Program and will provide guidance and assistance in hosting a foreign scholar.  If you intend for an international visitor to participate in research activities, please contact exportcontrol@nova.edu in addition.

Currently, all international travel must receive the college Dean’s approval, and then the approval of either the Provost or COO of Nova Southeastern University. Once this approval is received in writing, you may begin the additional travel registration as required by the Office of International Affairs.   Additionally, if you plan to take any device (including NSU laptops), NSU data, or NSU equipment, please contact exportcontrol@nova.edu.  Travel to certain countries may restrict travel with these items.

Travel to sanctioned or embargoed countries and other countries with heightened security requirements require review by International SOS and secondary authorizations will be required.

Please note that trips to Level 4 or 5 destinations will require secondary authorization from your department’s Dean or Vice President.