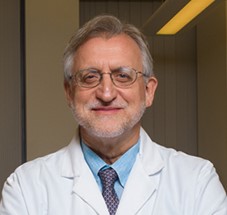 Dr. Theoharis C. Theoharides joined Nova Southeastern University (NSU) on July 1, 2022 as Professor at the Institute of Neuro-Immune Medicine, and Director of a new Center of Excellence on Neuroinflammation Research at the Clearwater campus. He has been Professor of Pharmacology and Internal Medicine and Director of Molecular Immunopharmacology & Drug Discovery, Tufts School of Medicine (1983-2022) and will remain as Adjunct Professor there.

Dr. Theoharides received his Bachelor of Art, Master of Science, Master of Philosophy, Doctor of Philosophy, and Doctor of Medicine from Yale University and was awarded the Winternitz Price in Pathology. He trained in internal medicine at New England Medical Center and received the Oliver Smith Award “recognizing excellence, compassion and service.” He was awarded the Tufts Distinguished Faculty Recognition and Excellence in Teaching Awards multiple times, as well as the Alumni Excellence in Service Award. He also received a Certificate in Global Leadership from the Tufts Fletcher School of Law and Diplomacy and a Fellowship at the Harvard Kennedy School of Government. He first showed that the unique tissue immune cells, mast cells, play a key role in the pathogenesis of in autism spectrum disorder, as well as in other conditions that involve neuroinflammation such as chronic fatigue syndrome and Long-COVID syndrome.

Dr. Theoharides has over 470 publications with 41,853 citations placing him in the world’s top 2% of most cited authors and he is the top-rated expert on mast cells by Expertscape. He has received 37 patents and trademarks. He was inducted into the Alpha Omega Alpha National Medical Honor Society, the Rare Diseases Hall of Fame and the World Academy of Sciences. He also received the 2018 Who Is Who Lifetime Achievement Award and the Distinguished Humanitarian Award. Dr. Theoharides has also helped develop some unique supplements containing flavonoids (www.algonot.com).

Return to Our Team