Laugh Your Fins Off Comedy Show

The Laugh Your Fins Off Comedy Show is put on by NSU tand has featured comedians like Kevin Hart, DeRay Davis, Kevin Hart’s Plastic Cup Boys, and Trevor Noah. 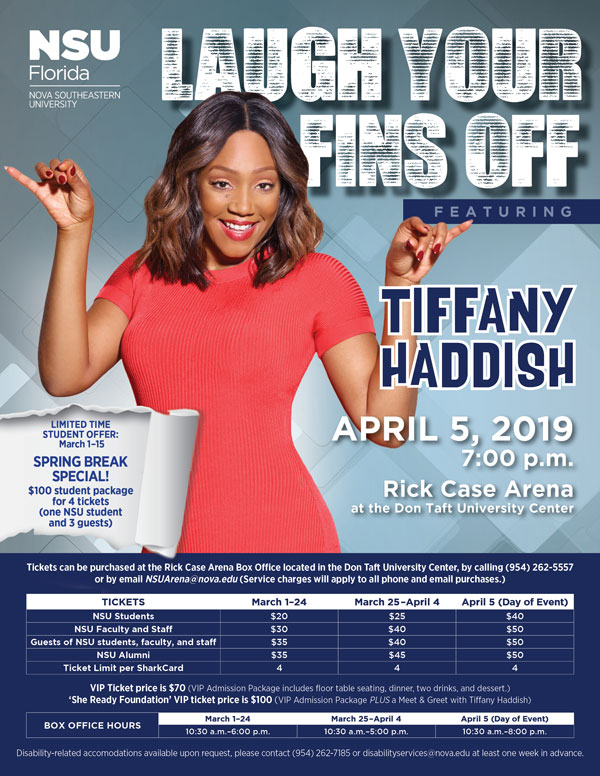 This April, Laugh Your Fins Off will be featuring Tiffany Haddish

Tickets can be purchased:

With multiple high-profile projects and buzzworthy appearances to her name, TIFFANY HADDISH has quickly established herself as one of the most sought-after comedic actresses and performers. She can currently be seen opposite Tracy Morgan on the TBS comedy series The Last O.G., currently in production on its second season. She also stars alongside Kevin Hart in Universal Pictures’ Night School, opposite Ike Barinholtz in Roadside Attractions’ The Oath (releasing October 12), and alongside Tika Sumpter in Paramount’s Nobody’s Fool (releasing November 2). She is also a first-time Emmy Award Winner for Outstanding Guest Actress in a Comedy Series for hosting Saturday Night Live.

Her additional upcoming film projects currently in development and/or production include Paramount’s Limited Partners, Universal’s The Temp, New Line’s The Kitchen, Warner Bros. Animations’ The Lego Movie 2, and Universal/Illumination’s The Secret Life of Pets 2. She will voice the lead character “Tuca” in the upcoming Netflix animated series Tuca & Bertie and is also at work on a one-hour standup special for the streaming platform. Additionally, she has a two-year, first-look deal with HBO for projects under her She Ready production company banner.

Haddish is perhaps best known for her breakout role in the smash comedy Girls Trip, where she appeared as the scene-stealing “Dina” alongside Jada Pinkett Smith, Queen Latifah, and Regina Hall. The performance earned her critical praise from the media, with Vanity Fair calling her “the funniest person alive right now” (7/17) and Vulture writing “you cannot take your eyes off Haddish when she’s onscreen” (7/17). Her additional film and television work includes Uncle Drew, The Carmichael Show, Keanu, Meet the Spartans, Racing For Time, The Janky Promoters, If Loving You Is Wrong, Real Husbands of Hollywood, and New Girl. Haddish was also an early stand out during her appearances on Def Comedy Jam, Who’s Got Jokes, and Reality Bites.

In June 2018, Haddish took the reins as the highly-anticipated host of the MTV Movie and TV Awards, a role that was met with critical acclaim and a significant ratings boost.

In addition to her acting work, Haddish continues to tour the country and perform to sold-out crowds on her “She Ready” comedy tour. Her debut stand-up special, Tiffany Haddish: She Ready! From the Hood to Hollywood, was released on Showtime in August 2017. In November 2017, she made history by becoming the first black female stand-up comedian to host Saturday Night Live, a role that earned her an Emmy nomination for Outstanding Guest Actress in a Comedy Series. Her first book, a memoir called The Last Black Unicorn, was released the following month and made the New York Times Best Sellers List.

Haddish’s journey and life experiences have inspired her comedy and sense of humor both on and off the stage. While growing up in foster care in South Central Los Angeles, her excessive talking and imaginary friends prompted her increasingly-flustered social worker to steer her into standup comedy by enrolling her in the Laugh Factory’s

Comedy Camp, a place for at-risk and underprivileged children to transform negative energy into something positive. The experience became just the beginning of her comedy career.

She currently lives in Los Angeles.