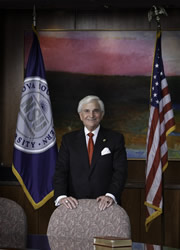 George L. Hanbury II, Ph.D. is the sixth president of Nova Southeastern University the largest, not-for-profit, private university in Florida. He assumed the role of President and CEO in July 2011.

One of his first accomplishments as president was to refocus the university’s mission and vision, establishing eight core values to guide the university into 2020 and beyond: Academic Excellence, Student Centered, Integrity, Innovation, Opportunity, Scholarship/Research, Diversity and Community. Under Dr. Hanbury’s leadership, NSU became one of only 37 universities in the nation to hold the Carnegie Foundation for the Advancement of Teaching’s dual designation of both “Community Engaged” and “High Research Activity.”

Dr. Hanbury has been honored by many organizations, including being once again named as a 2020 South Florida Business Journal Ultimate CEO. Additional accolades include the 2019 Guy Harvey Conservation Award, 2017 Junior Achievement Business Hall of Fame Laureate, City of Ft. Lauderdale Walk of Fame inductee, 2015 Sun Sentinel Excalibur Award, 2014 South Florida Business Journal Ultimate CEO award, Fort Lauderdale’s 2013 Downtowner of the Year, and many other community related awards throughout his career. He also commits much of his time to civic activities by serving on numerous boards, including the Greater Fort Lauderdale Alliance, the Comprehensive Economic Development Strategy Committee, Broward Workshop Executive Committee, the Economic Council of Palm Beach County, the Business Development Board of Palm Beach County, the Miami Dade Beacon Council, the Florida Council of 100, and the Sunshine State Conference.

Dr. Hanbury has been certified through the Senior Executive Institute at the University of Virginia and has been recognized for his leadership by service organizations, city councils and commissions, as well as chambers of commerce across the nation. He has lectured throughout the country to various executive groups on topics such as leadership, public policy, the council/manager form of government, economic development, executive motivation and public speaking.