Joseph G. Ouslander is a professor of geriatric medicine and senior adviser to the dean for geriatrics and former chair of the Department of Integrated Medical Science at the Charles E. Schmidt College of Medicine at Florida Atlantic University in Boca Raton, Florida.

Ouslander is a graduate of Johns Hopkins University’s Case Western Reserve School of Medicine. He served as a geriatric medicine fellow and subsequently a professor at the UCLA School of Medicine, where he spent 15 years developing clinical, educational and research programs. From 1996 to 2008, he served as the director of the Division of Geriatric Medicine and Gerontology at Emory University. From 1999 to 2000, Ouslander served as president of the American Geriatrics Society and as its board chair from 2000 to 2001. Additionally, he has served in the editorial leadership of the Journal of the American Geriatrics Society for 27 years, currently as its executive editor. He also serves on the CMS Nursing Home Five-Star Expert Panel and on the Federal VA Gerontology and Geriatrics Advisory Committee.

He received the 2012 Nascher/Manning Award from the American Geriatrics Society for his distinguished career and lifelong achievements in clinical geriatrics, including research on urinary incontinence, falls and other geriatric conditions. Further achievements also include the creation and dissemination of Interventions to Reduce Acute Care Transfers (INTERACT)—a quality improvement program that assists long-term and post-acute care organizations in improving care and reducing unnecessary hospitalizations and their related complications and costs.

Ouslander has published more than 200 original articles and book chapters, is a coauthor of Essentials of Clinical Geriatrics and an editor of two major textbooks in geriatrics—Hazzard’s Geriatric Medicine and Gerontology and Nursing Home Care. Ouslander has lectured extensively throughout the United States, as well as in Europe, Israel, Japan, Australia and Singapore.

Bernardo Reyes, M.D., CMD, is a board-certified internist and geriatrician. He is an assistant professor of geriatrics at the Charles E. Schmidt College of Medicine at Florida Atlantic University (FAU) in Boca Raton, Florida, where he serves as the director of the geriatric and palliative rotations and associate director of the internal medicine residency program. In this role, Reyes oversees the learning experience of the college’s internal medicine resident physicians. Reyes is also the attending physician for the Delray Medical Center Inpatient Geriatric Service and precepts in the Resident Outpatient Clinic.

Harrison’s Principles of Internal Medicine, editorials and letters to the editor in different journals such as the New England Journal of Medicine, original peer-reviewed research publications, as well as dozens of posters and oral presentations in regional, national and international venues. His research portfolio is focused in the areas of safe transitions of care of at-risk older adults and early identification of sepsis in the post-acute setting. In addition, he designed and implemented an international exchange program between FAU and Universidad de Navarra in Pamplona, Spain, for FAU students to learn medical Spanish and the differences between the health care systems in Europe and the United States. 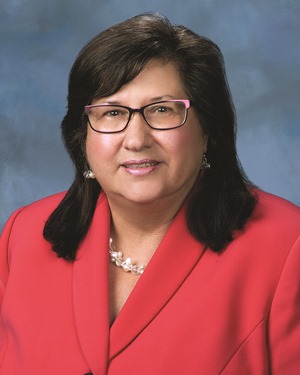 Marti Echols, Ph.D., has been involved in medical education for more than 35 years. Her experiences, which span the continuum of medical education. Have included premed and postbaccalaureate students, as well as residents and physicians.

Echols has had the privilege of working in a variety of national and international roles in both medical schools and hospitals in faculty, research and administrative positions. She currently serves as the dean of the College of Biomedical Sciences at Larkin University. She has a special interest in program development, as well as assessment and accreditation. Echols passion in education has always been to help students achieve their highest potential.

She currently resides in Florida, but was a resident of Ohio for many years. Echols received her Ph.D. from Ohio University in Athens.

This project is supported by the Health Resources and Services Administration (HRSA) of the U.S. Department of Health and Human Services (HHS) as part of an award totaling $3.5M with 25% financed with nongovernmental sources. The contents of this website are those of the author and do not necessarily represent the official views of, nor an endorsement, by HRSA, HHS, or the U.S. Government.